This section describes the AsTeRICS Plugin-Creation tool and the plugin-activation process. These tools make it easy to create new plugins and make them available in ACS and ARE. They can be started manually from their location in the AsTeRICS_runtime.zip package (folder: “ACS/tools”) – or they can be launched from the “Misc.” – Tab in the main menu of the ACS:

The creation of a new AsTeRICS plugin for the runtime environment involves several steps:

This process is similar for each plugin, and involves much work and sources of errors, especially for people who work with the AsTeRICS framework for the first time.

Usually, you look for a plugin with similar specifications, copy its folder structure and then rename and change the files as desired. But also this process needs some effort and errors/typos can be introduced very easily.

The purpose of the AsTeRICS Plugin Creation Tools is to make it easy to create new plugins, by providing the necessary folder structure, the bundle descriptor and a template for the JAVA source code.

The plugin Creation wizard allows definition of characteristics of a new plugin and creates the needed folders and files for the Eclipse build flow, including the JAVA source code skeleton and the plugin’s bundle descriptor. 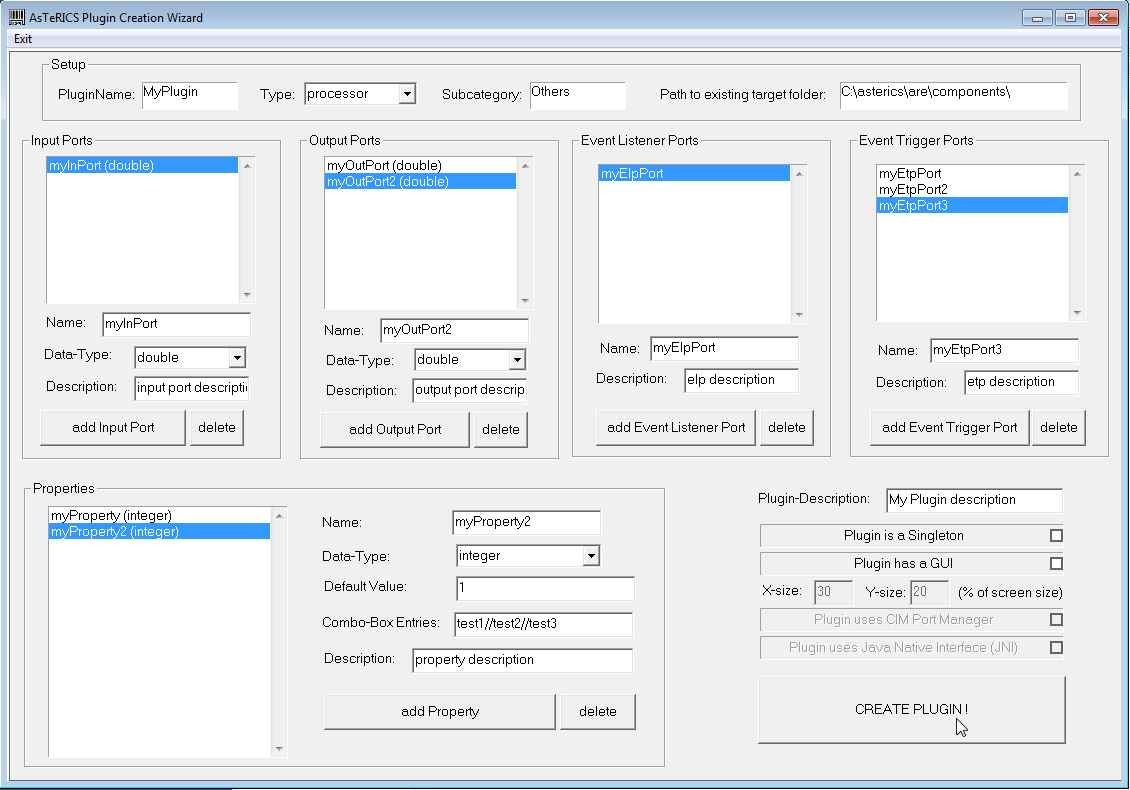 As can be seen in the above figure, desired input- and output ports, data types, properties and plugin-features are simply selected and added to list boxes on the screen.

After “Create Plugin!” has been pressed and the plugin creation was completed successfully, following sub-folders and files are begin created: 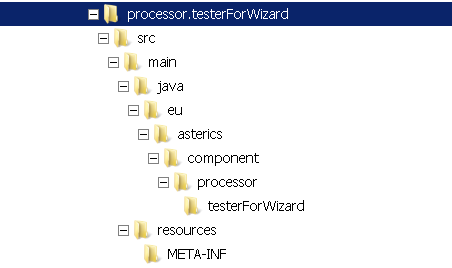 The root folder contains the build script, which can be executed inside Eclipse to compile and build the plugin (.jar) file: 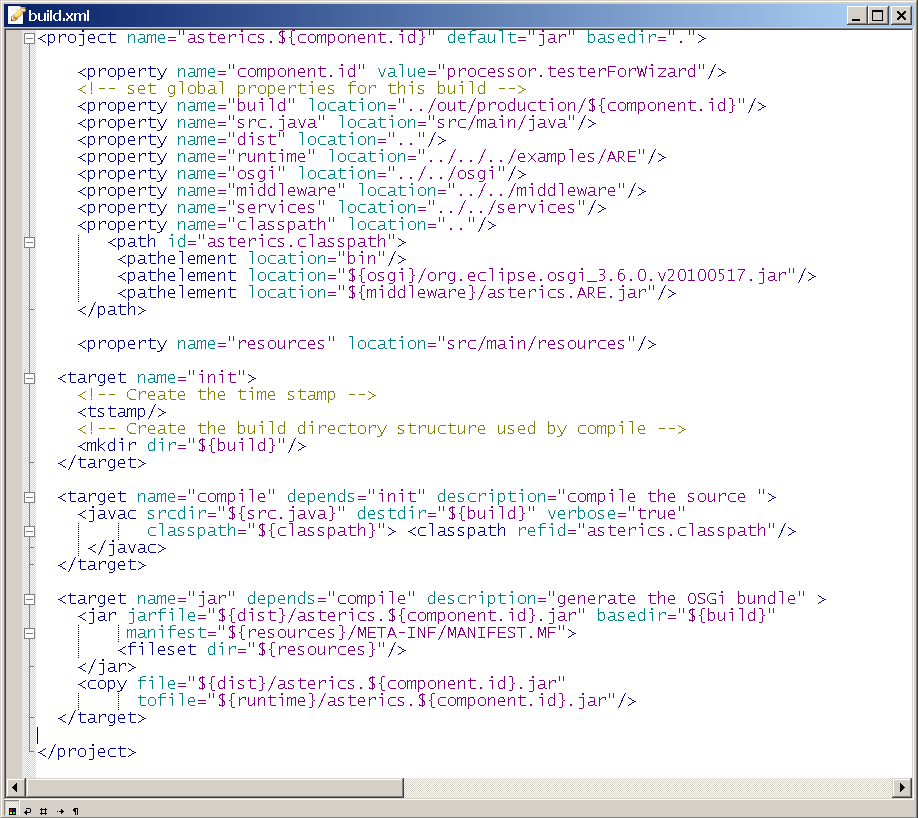 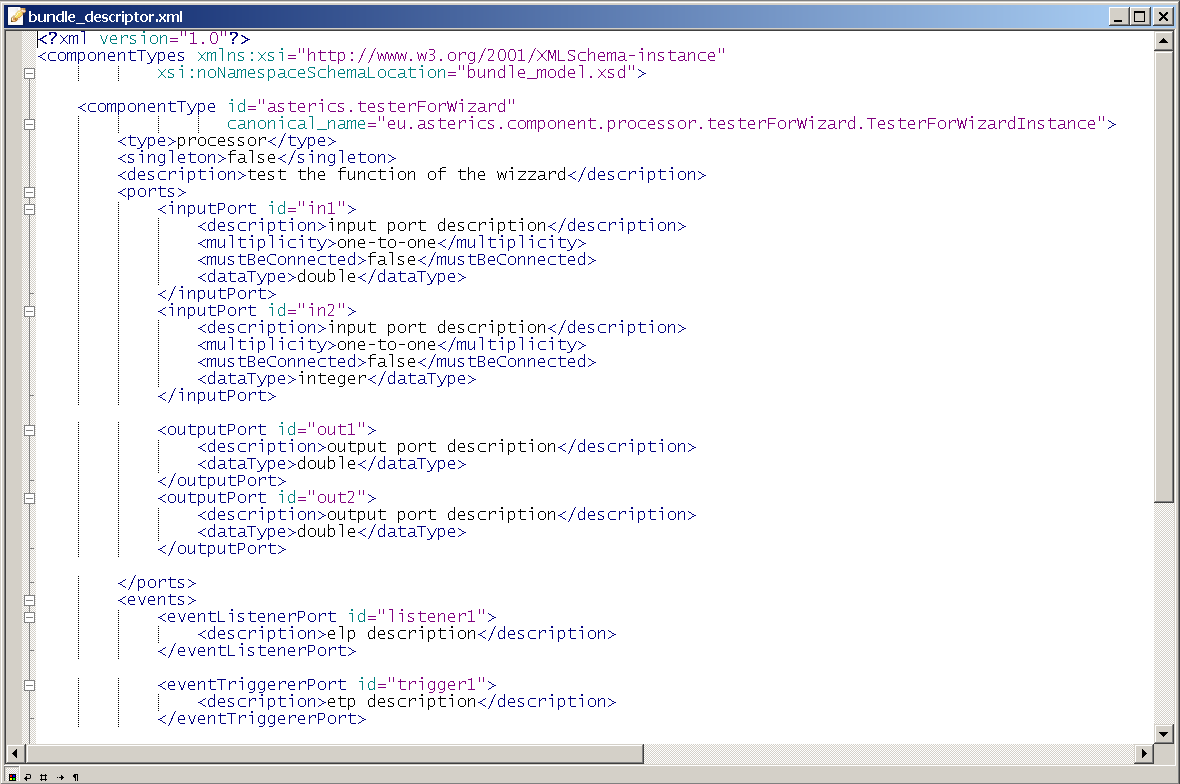 The source code folder src/main/java/eu/asterics/component/<pluginType>/<pluginName> contains a template for the plugin source code in JAVA, including the definitions of the selected ports and properties and the needed get- and set- methods for ports and property values. The code skeleton complies to the AsTeRICS coding guidelines and contains the AsTeRICS source file header (only a small portion is shown in the following screenshot). 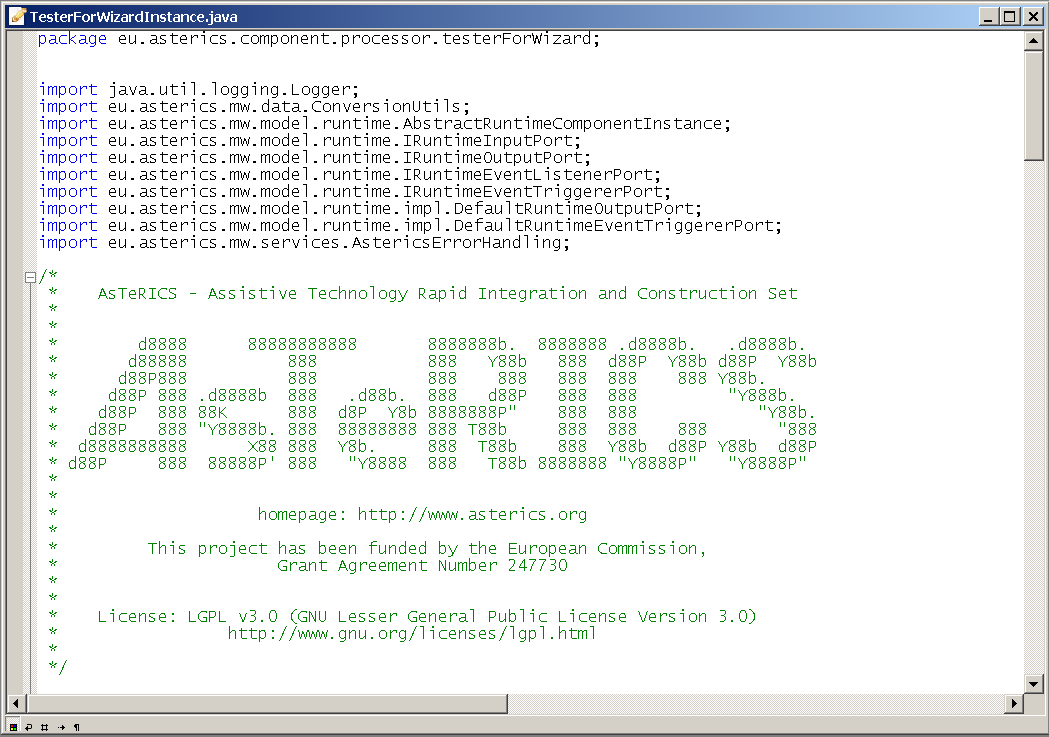 After the Eclipse IDE has been opened, Eclipse must be pushed to refresh the folder structure by pushing F5. Furthermore, the path src/main/java must be configured as source folder.

The plugin code can be built using the provided build script (right-click build.xml -> RunAs -> Ant Build in the plugin’s folder) 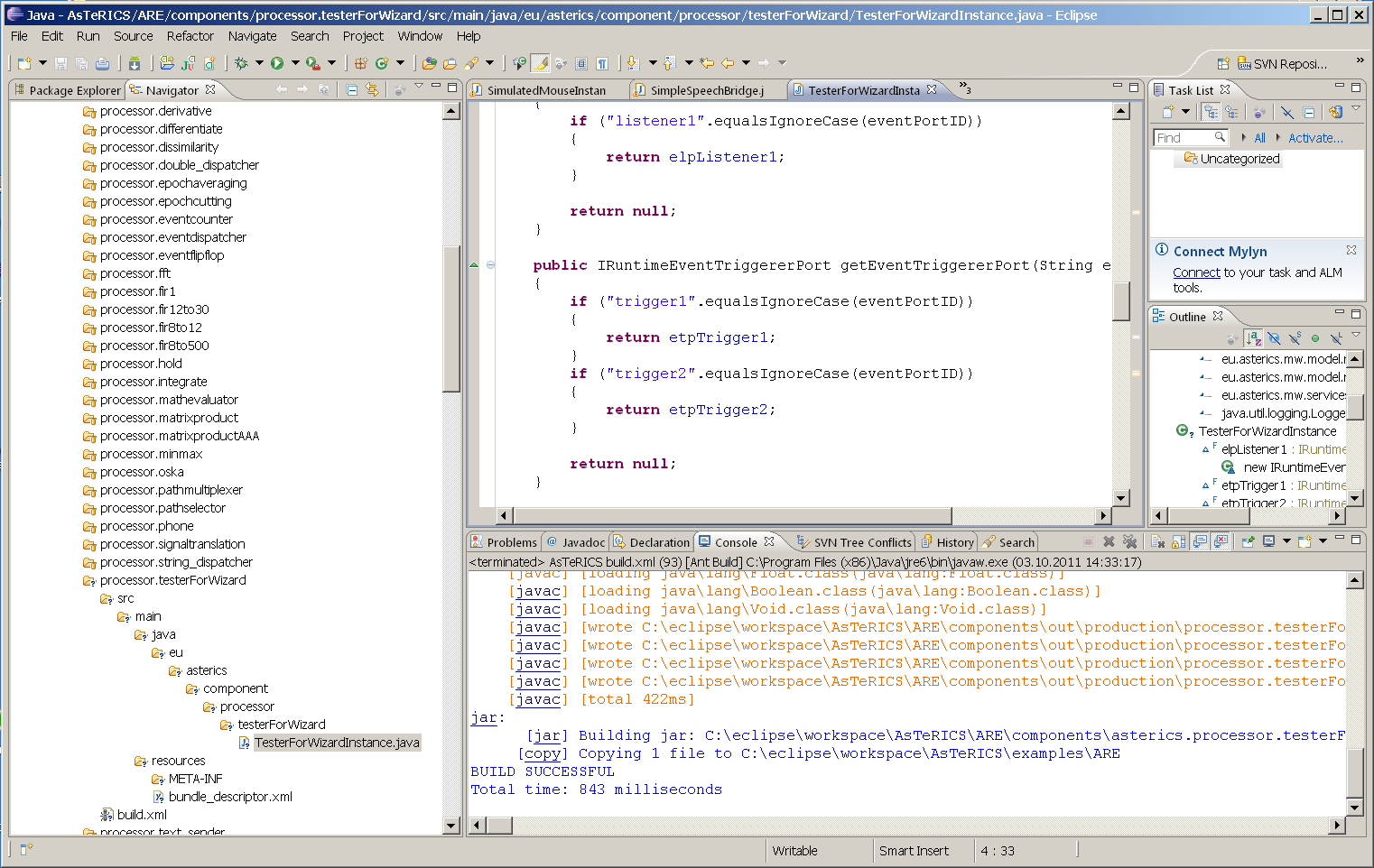 To see the plugin in the ACS editor window and/or start it inside the runtime environment, the Plugin Activation Tool can be used (see section 3).

# Plugin Activation in ACS and ARE

To use a new AsTeRICS plugin which has been built using the Eclipse build flow and exists as executable .jar file/OSGI bundle, one step is necessary:

Subsequently, the plugin can be selected in the “components” menu of the ACS, and the ARE will activate the plugin at startup.

# Component-Collection Management in the ACS

The ACS provides a function for downloading the bundle descriptions of all active plugins directly from a running ARE and creating a component collection file from this information. (“System”- tab, Button “Download Component Collection”):

Within the ACS Component-Collection Manager (in the “Miscellaneous” tab), component collections can be selected or set as default collection for the ACS startup. For details see the User Manual, ACS section.

Please note that the “loader.ini” – file has to be updated manually in the ARE’s “profile” subfolder, by addition of the new .jar filename. After restart of the ARE and connection to the ACS, the component collection can be downloaded.

Since AsTeRICS version 2.8 the licenses (including licenses of third-party libraries) of a plugin must be provided as .txt files in the LICENSE subfolder. The filenames must follow a defined naming convention, which is:

A contributor must add the respective license file for the component (either LICENSE_MITOrGPLv3WithException.txt or one of the two dual license options) to the component/LICENSE folder. Furthermore, for each thirdparty library used, the license file must be added with the following naming convention (Please use CamelCase notation for the library and license names):