The FacetrackerCLM component is one of the vision based plugin. At this stage of development it offers the same functionalities for mouse emulation as the other sensor plugin named facetrackerLK .

The underlying mechanism is based on the tracking of facial features detected in a first initialization stage by fitting a deformable face model on the image as soon as the region of interest is identified thanks to the OpenCV implementation of the Viola-Jones classifier.

The plugin outputs at each frame the relative offsets of a series of measures based on the tracked points with respect to the previous frame. These offsets may be integrated or used directly as inputs for the mouse emulator actuators. Usually it is a good idea to use the relative displacement of the centre of the face (PosX and PosY) to guide the mouse movements and reserve the other measurements or events to implement other optional functionalities (the head roll, pitch and yaw angles and relative scale of the face).

The FacetrackerCLM also introduces the detection of facial gestures that can be then exploited in the ACS models to directly perform actions or trigger events. In this version an event is sent for the detection of the raising of both eyebrows.

For a closer explaination of the EyeTrackerCLM functions and the training algorithm for eye states please refer to the document FacetrackerCLM.pdf in the folder /documentation. 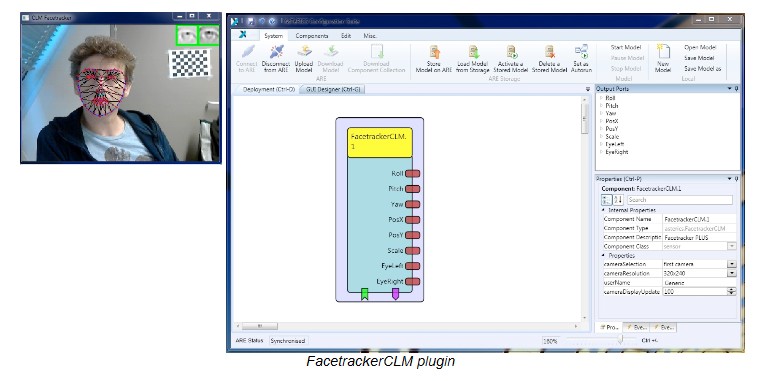 A camera has to be available in the operating system (preferably a consumer USB camera).

There are no input ports for this plugin.